Hi friends, welcome back to my Paris and London Anniversary series 🙂 I’m picking up on day three of our trip after we spent most of the day touring the Louvre. Jon and I rested up a bit back at our hotel before beginning the trek down the Champs-Élysées (pronounced shahnz ay-lee-zay) to the Arc de Triomphe. We went on a beautiful Saturday afternoon, probably the busiest time to make the 2.7 mile walk from our hotel to the famous arch, but we enjoyed cruising down this famous Parisian street. It reminded me a bit of walking down Fifth Avenue at Christmastime.

After crossing the Seine River, Jon and I walked under the smaller Arc de Triomphe du Carrousel and through the Jardin de Tuileries. The almost 70 acre garden sits directly in between the Louvre and Place de la Concorde. Prior to being a public park, this area was the royal garden of the Tuileries Palace. The palace burned down, but luckily the garden survived and was opened to the public.

This is a picture of what it used to look like, hard to imagine a whole palace used to be here. (picture is from Wikipedia) 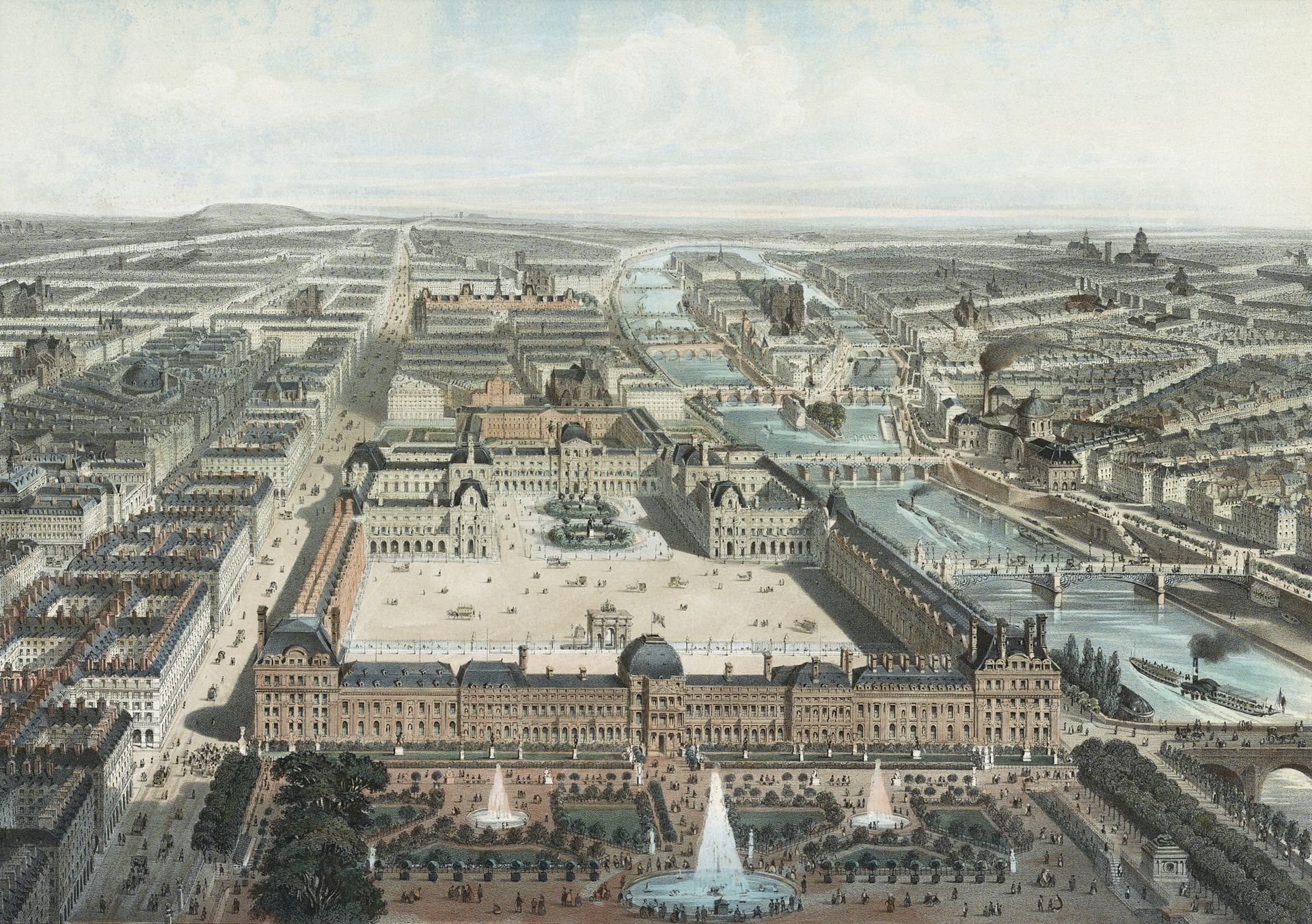 Nowadays there are many places to sit, sculptures to admire, paths to wander, and space for kids to run around. Jon and I walked through this expansive park quite a bit throughout our trip.

We next passed through the Place de la Concorde, the location of Marie-Antoinette, Louis XVI, and 1,200 other beheadings during the French Revolution. The hard to miss obelisk of Luxor in the center of the square was placed by Louis XVI’s brother Charles X to commemorate the beheadings. It is 72 feet tall, 220 tons, and 3,300 years old. The obelisk was brought to France in 1830 after being removed from Ramses II’s Temple of Amon in Luxor.

The iconic Champs-Élysées runs 1.2 miles ( 1.9 kilometers) from the Place de la Concorde to the Arc de Triomphe. It is lined with trees, luxury stores, cafes, and everything in between. We didn’t do any shopping but I noticed very long lines at the designer stores, especially Louis Vuitton! Jon’s lucky I’m not a purse gal 😉

The Arc de Triomphe was built by Napoleon in 1809 to commemorate his victory in the battle of Austerlitz. This Roman inspired arch stands 165 feet tall and was dedicated to the armies of the Revolution and Empire by Louis-Philippe in 1836. Napoleon didn’t survive to see its completion, but he was taken through the arch during his funeral procession.

The Arc de Triomphe is also famous for being where the Nazis arrived in Paris, where Charles de Gaulle returned after the Allies won the war, the tomb for the Unknown Soldier, and a place for celebrating the World Cup victory in 2018. In addition, the Bastille Day military parade begins at the arch and the Tour de France ends here.

There are stairs that go below this crazy roundabout to get to the base of the Arc de Triomphe. You can walk around the base of the arch for free, but you need tickets to go up to the top. The line to climb up was long, but it moved pretty fast, so don’t be discouraged if it looks insanely long. We climbed 284 spiral stairs, but it was worth the cardio and cost of admission for the incredible views at the top!

I loved seeing all twelve avenues converging at the arch and watching the traffic navigate the wild roundabout. Apparently, the cars entering the circle have the right of way.

Our first unobstructed views of the majestic Eiffel Tour on our trip!

We could see Montmartre and the Sacre Coeur all the way in the distance. (Spoiler alert: we walked there from our hotel the following morning)

Getting an unobstructed picture up here was quite the task, but we succeeded. This would also be a great spot to watch the sunset!

Jon and I walked all the way home, another 2.7 miles, and then feasted at our favorite restaurant we tried in Paris called Pizzeria Positano. We ordered pizza, pasta, and the tiramisu!

Day three in Paris was amazing, but tiring. We walked over 27,000 steps and saw the Louvre, Tuileries Garden, Champs-Élysées, and the Arc de Triomphe. We had the best day exploring Paris, stay tuned for day four starting in Montmartre 🙂

Posts in my Paris and London Anniversary series:

Published by Lyssy In The City

View all posts by Lyssy In The City

This site uses Akismet to reduce spam. Learn how your comment data is processed.

Hey there! I'm Lyssy and welcome to my blog! I'm a Michigan native living in NYC with a passion for food, travel, yoga, puppies, and fitness. I hope to inspire you to travel as much as you can and try new things :)